Here’s Why Your Kitchen Needs a Boiling Water Tap

Boiling water taps have been around for a few years now and, what was once considered a rather luxurious purchase are becoming a staple in new builds and renovations.

There are incredibly popular in Ireland these days and many of our customers say they simply couldn’t imagine their kitchen without one. If you’re building a new home, upgrading your kitchen or looking to streamline your kitchen countertop, boiling water taps could be a game changer.

So, what is a boiling water tap, and should you consider adding one to your kitchen wishlist? We’ve put together this handy guide to help you decide.

What is a Boiling Water Tap? 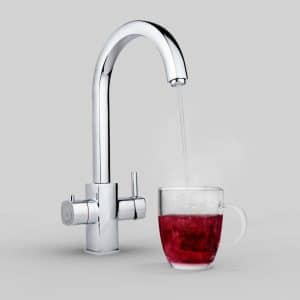 The name gives the game away. Boiling water taps are just like regular taps but are also capable of dispensing boiling water instantly. They deliver piping hot water on demand, which means no more waiting around for the kettle or pan to boil.

There are a few different types of hot water taps available to choose from:

Boiling water taps work with the help of an electric-powered hot water tank. These tanks plug directly into a power socket and are connected to your water supply. They heat the water and store it in the tank – when you turn your tap on to use the boiling water, it can then be delivered instantaneously. These tanks have been designed for convenience, with easy-to-use controls and/or digital screens.

Most households should be able to install a boiling water tap. All you need to check is:

Despite their name, most boiling hot water taps dispense water at around 98°- 99°C. This accounts for the loss of heat in the time it takes to travel out of the tap and into your cup. However, as many lovers of boiling water taps point out, tea or coffee should not be made with boiling hot water, anyway!

Many of the best hot water taps also come with adjustable temperature options – so you can choose just how hot your water is.

Reasons to Install a Boiling Tap in Your Kitchen 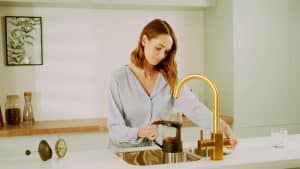 Wondering if an instant boiling water tap is the right choice for you? These fantastic benefits might be all that’s needed to convince you to ditch the kettle and upgrade your kitchen tap.

Boiling water taps provide hot water in an instant, so you don’t have to stand around waiting for the kettle to boil, which saves time – ideal for when you’re rushing around on busy weekday mornings or making hot drinks for guests. Also, if you find it difficult to lift and pour a kettle, then you may find a boiling water tap much easier and safer to use.

More often than not, people boil more water than is needed in their kettle, whether for hot drinks or pre-boiling water to cook food in a pan. A boiling water tap enables you to dispense exactly the right amount of water you need, for instance, a single mug of tea.

Getting the water up to temperature just once and then storing it ready to use when you need it is wonderfully energy-efficient and means you only ever use as much water as you need. Typically, boiling water taps would cost around 4.5 cents to use per day saving you a lot in comparison to a kettle or a hob.

Perhaps one of the reasons boiling water taps are now so popular, is their ability to eliminate the need for unsightly electric kettles. With the growing demand for modern kitchens, customers go for more minimal and stylish backdrop which, unfortunately, means unnecessary worktop clutter has to go. Opting for a sleek boiling water tap is the ideal solution to achieving a refined and sophisticated aesthetic.

Many people have concerns over the safety of instant boiling water taps; however, they are much safer than a kettle or pan of water. They have safety features built in, such as the handles which are designed to require more than a simple twist to turn them on, ensuring that the boiling water can’t turn on accidentally or automatically

What Can You Use a Boiling Tap For? 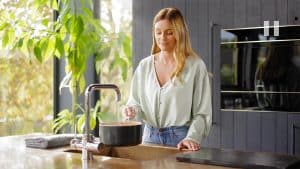 There are numerous ways that you can use your boiling water tap to streamline countless everyday kitchen tasks. We discuss a few here:

Firstly (and arguably most importantly) with a hot water tap delivering steaming hot water at up to 98°C, there’s no more waiting for the kettle to boil before you can enjoy a brew. Just back from the school run, catching up over a cuppa with friends or winding down with a hot drink? Then there will always be enough hot water in the tank.

Also, if you like multiple cuppas a day, it’s usually more energy efficient than boiling the kettle each time.

Quickly cook pasta as there is no need to wait while the water heats up, you have boiling water immediately thanks to the boiling tap. The same goes for lots of ingredients including noodles, rice, eggs and couscous. Great if you’re preparing dinner on the run for a hungry but busy family.

Cleaning fruit and vegetables takes no time with a hot water tap. Use cold for washing fruit and veggies before eating them, or for blanching of course. In addition, if you grow your fruit and veg, picking and washing your produce just got a whole lot easier.

Streamline your countertops – with the kettle redundant and a boiling water tap dispensing cold, hot and boiling water on demand, only one tap is needed. This is ideal for creating a streamlined and minimal finish and for keeping your kitchen looking neat and tidy.

Who likes doing the dishes? However, certain things can only be washed by hand or pre-rinsed. The job of rinsing off pans, plates and cutlery ahead of placing them in the dishwasher is far more effective with really hot water, making this yet another time-saving benefit of the boiling water tap. And for any large, dirty trays, casserole dishes or grills, soak them in boiling water and avoid the endless scrubbing.

Create the Kitchen You Deserve

A boiling water tap is not your average kitchen tap. It’s a stylish, convenient & economical solution to a beautiful kitchen. The benefits thus extend beyond the convenience of the perfect cuppa on demand, into a healthier, happier lifestyle overall.

Speak to a Consultant


RECENT POSTS
How Safe Are Boiling Water Taps?
Switch to Soft Water to Save €600 Every Year
Holiday Closing Notice
Here’s Why Your Kitchen Needs a Boiling Water Tap
THMs in Water – Everything You Need to Know