THMs in Water – Everything You Need to Know

There has been a lot of talk about THMs recently. The Drinking Water Quality in Public Supplies Report for 2021 published by Ireland’s Environmental Protection Agency (EPA) highlights the number of supplies breaching THMs levels increased in 2021, reversing all progress seen in recent years.

If you are not familiar with THMs, read on to understand what they are, how they get into your drinking water and should you be concerned about them.

Trihalomethanes, commonly known as THMs, are a group of organic chemicals which are formed as a by-product of adding chlorine to water containing high levels of organic material (e.g. vegetation). Trihalomethane compounds are colourless and evaporate from the water into the air.

The concentration of THMs in drinking water varies according to the level of organic matter in the water, the amount of chlorine used to treat the water and the temperature of the water.

How are you exposed to Trihalomethanes?

THMs are volatile substances and are ultimately transferred to air either at room temperature or by rapid evaporation on boiling. So, exposure to these compounds can also occur through inhalation, especially when showering and bathing.

THMs can be inhaled or absorbed through the skin when showering or bathing.

The Health Service Executive (HSE) says excessive THMs in drinking water over a short term is unlikely to result in any health risk. It also says that the potential risk from drinking untreated water far outweighs any possible risks from long-term exposure to THMs.

The legal limit of total THMs in drinking water in Europe is 100 µg/L (micrograms per litre). The maximum accepted level for trihalomethanes is set at a safe level that balances long-term health risks but also keeps the drinking water safe from bacterial contamination.

High levels of trihalomethanes are dangerous. People who consume trihalomethanes over many years have an increased risk of damaged kidneys, liver, bladder, and malfunction of the central nervous system.

THMs are classified as “possibly carcinogenic” to humans. This means that scientific evidence cannot conclude definitively whether or not THMs cause certain cancers in humans.  There is some evidence that THMs cause cancer in animals.

How to remove THMs in drinking water?

Fortunately, trihalomethanes can be removed from drinking water and there are various methods to do so.

Perhaps the best method for controlling the levels of THMs is by treating raw water at a treatment plant through enhanced coagulation. The enhanced coagulation process optimizes the filtration process to maximize the elimination of organic matter. This is done by reducing the pH level to as low as 4, using ferric coagulants instead of alum, and increasing the coagulant’s feed rates.

Some of the most convenient ways to remove THMs from tap water at home are: 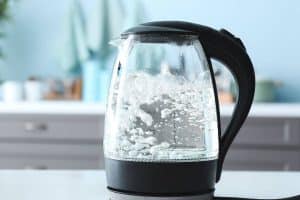 Boiling your water is a simple method to drastically reduce the levels of trihalomethane in your water. Boiling water for one minute can reduce the trihalomethane concentration by 75 per cent. Allow the water to cool before consumption as it allows the THMs to partially evaporate into the air. 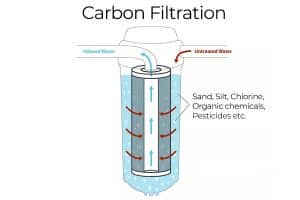 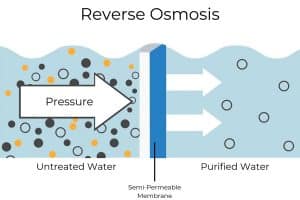 Can you remove THMs from shower water?

As THMs are volatile chemicals which are released into the air, people are highly exposed to them in bathrooms. Due to hot steamy showers and tight space, there is a higher concentration of THMs in the air we breathe than for example somewhere like our kitchens. Moreover, open pores on the skin make us highly vulnerable to THMs exposure when showering.

Therefore, THMs must be removed from the water before showering. Generally, shower filters also use filtration media made from carbon. Our shower filter uses a granular activated carbon with advanced KDF-55 media to remove chlorine & THMs from shower water. It protects skin & hair from dryness, is easy to install and offers an inexpensive way of keeping THMs out of bathrooms.

With adequate ventilation in bathrooms through open windows and extraction fans, the risk of exposure to THMs is significantly reduced.

The chlorination process is essential for purifying water to make it safe for human consumption. The levels of chlorine in water are carefully monitored to ensure they remain at a safe standard.

However, the chlorination process also produces trihalomethanes, which can be harmful to human health. Trihalomethanes are known carcinogens and increase the risk of cancer and miscarriage in pregnant women.

It is recommended to have a water filter with carbon installed at home to filter out THMs and make water safe for use.

If you are looking for ways to improve drinking water quality at your home, speak to our team of experts and we can recommend you a suitable water filtration system as per your need & budget.

Speak to an Expert


RECENT POSTS
How Safe Are Boiling Water Taps?
Switch to Soft Water to Save €600 Every Year
Holiday Closing Notice
Here’s Why Your Kitchen Needs a Boiling Water Tap
THMs in Water – Everything You Need to Know