How to Interpret Your Water Test Report?

Obtaining a water analysis report from a testing laboratory is a necessary first step toward solving water quality problems especially if you rely on an unregulated water source such as a private well.

Water testing and treatment are the only ways a homeowner can ensure a safe and reliable water supply. A properly interpreted water analysis report forms the basis of a customized water treatment solution to remove specific contaminants present in your water.

However, the results from these water tests can be confusing. Many testing laboratories provide little additional explanation of test results beyond the units used and possibly a footnote or similar comment if a problem contaminant is identified.

The information provided below, along with a glossary of water testing terms, may assist you in understanding a water analysis report for some of the more common household water quality contaminants.

Features of a Water Analysis Report

Once the lab has completed testing your water, you will receive a report that looks similar to the following image. 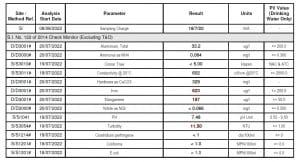 It will contain a list of contaminants tested, parametric values, results, and, in some cases, highlight any problem contaminants.

The most common concentration unit used is milligrams per litre (mg/L) which, in water, is approximately equal to one part per million (ppm), or one-part contaminant to one million parts water.

For many chemical compounds and toxic substances, the units used to measure concentration are even smaller. In these cases, micrograms per litre (µg/L) is used.

Some contaminants have units that are specific to the test like those used for conductivity and turbidity.

Others, such as pH, are expressed as an index number and not in terms of concentration, and therefore have no units.

Most countries have standards or guidelines regarding the maximum contaminant levels in drinking water. The Government of Ireland has also published a set of water quality standards for key contaminants, which are guided by the European Union (Drinking Water) Regulations S.I. No. 122/2014.

We discuss about them in detail here.

Coliform bacteria are organisms that are present in the environment and the faeces of all warm-blooded animals and humans. Their presence in drinking water indicates that disease-causing organisms (pathogens) could be in the water system.

The total coliform group is a large collection of different kinds of bacteria. Measured in Colony Forming Units per 100 millilitres (cfu/100 mL)

The presence of coliform bacteria in drinking water is unacceptable.

E.coli is a sub-group of the coliform group. The presence of E. coli in a drinking water sample almost always indicates contamination with human or animal waste or that the disinfection system is not operating adequately.

The presence of E.coli bacteria in drinking water is unacceptable.

Read More: How to Remove Bacteria from Drinking Water

At high pH, the water will have a slippery feel or a soda taste.

Conductivity is a measure of the ability of water to pass an electrical current. Pure water is not a good conductor of electric current.

Conductivity in water is affected by the presence of ions concentration. Salts or other chemicals that dissolve in water can break down into positively and negatively charged ions. These free ions in the water conduct electricity, so the water’s electrical conductivity depends on the concentration of ions.

Elevated nitrite levels in drinking water are often caused by contamination from animal waste run-off from farms, excessive use of fertilizers, or seepage of human sewage from private septic systems. Microorganisms in the soil, water and sewage change the nitrate to nitrite.

High levels of nitrites are toxic to humans and animals, especially infants.

Ammonia and its ionized form, ammoniums formed naturally as a product of the microbiological decay of nitrogenous organic matter (animal and plant protein). Water contaminated with sewage, animal wastes, or fertilizer runoff may have elevated levels of ammonia.

Iron may naturally be found in surface water or groundwater or as a result of corrosion of iron water pipes. Excessive iron in water often imparts a metallic taste and smell to the water. As a result, it also affects how food and beverages taste making them less appealing.

Furthermore, water with excessive iron often leaves orange or reddish stains on clothes, bathroom fixtures, sinks, and dishes. Over time, iron sediment and residue can build up in your home’s pipes and cause clogging or poor drainage.

Manganese is a metal widely found in rocks and soils. Manganese in drinking water can cause aesthetic issues such as metallic-tasting water and black stains on tubs/showers, toilets, plumbing fixtures, and laundry.

Studies suggest an association between exposure to manganese in drinking water and neurological issues in infants and children, such as changes in behaviour, lower IQ, speech and memory difficulties, and lack of coordination and movement control.

Water hardness is the amount of calcium and magnesium that is dissolved in the water. Water with high levels of these minerals is considered hard. These minerals are not a health concern; however, hard water can cause problems around the home.

Problems occur when the water is too hard and deposits on pipes leaving a white residue commonly known as limescale. This can build up over time leading to appliances breaking down quickly, increased energy bills and pipes being blocked.

Read More: How to Remove Limescale from House

Turbidity is the measure of the relative clarity of a liquid. The turbidity of water depends on the quantity of solid matter present in the suspended state.

Excessive turbidity, or cloudiness, in drinking water is aesthetically unappealing, and may also represent a health concern. Turbidity can provide food and shelter for pathogens.

It is measured in nephelometric turbidity units (NTU).

The water you drink from a tap, well, or any other source could be contaminated without anyone knowing. If you are experiencing problems with your well water, the first step is to get your water supply tested by a reputed laboratory.

We, at Celtic Water Solutions, have more than 20 years of experience treating private wells in Ireland. We follow a consultative approach to well water treatment. Our team will ask for your water test results and after interpreting them would suggest the best treatment system to treat your well water.

We also partner with INAB-accredited laboratories that are strictly compliant with International & European Standards for testing.

As a one-stop shop, our team can assist you in the whole process by getting your water tested at our partner labs, interpreting the results for you, and suggesting the best treatment system to remove the problem contaminants.


RECENT POSTS
Here’s Why Your Kitchen Needs a Boiling Water Tap
THMs in Water – Everything You Need to Know
How Does Limescale Affect Your Heating System & Energy Costs?
How to Interpret Your Water Test Report?
Discontinuation Notification: Legionella Control